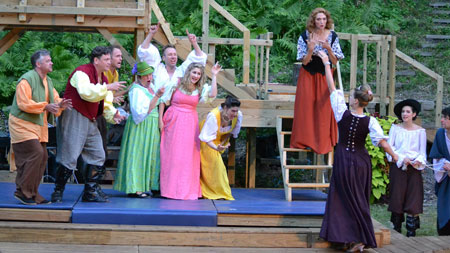 Each year, the Lakeside Shakespeare Theatre brings two Shakespearean plays to the beautiful outdoor venue of Tank Hill in Frankfort.

Featured in 2019 were The Two Gentlewomen of Verona- An Adaptation of Shakespeare's Classic by Jeff Christian and The Rover- by Aphra Behn, Adapted by Janice L. Blixt.

Performances are offered free to the public and no pre-sale tickets are necessary. A suggested donation of $15 per person helps offset production costs.

History of the Lakeside Shakespeare Theatre

The festival began in 2003 when founding members, Elizabeth Laidlaw and Jeff Christian created the Lakeside Shakespeare Theatre. The idea was to have a group of professional actors from Chicago present free, outdoor Shakespeare productions to the people of Benzie County. That year, the group performed their inaugural show of A Midsummer Night's Dream three times during a single weekend. The event was so popular that it was expanded in 2004 to include two Shakespearean productions performed over a two week period. 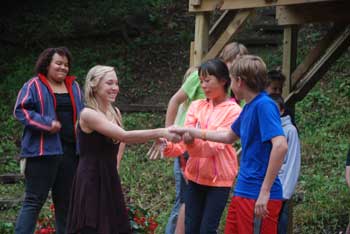 Since that time, the group has expanded their reach by including free children's theatre workshops which now offers classes for children ages 5-14 each year. They've also added an intern program, afternoon performances at Michigan Shores- a retirement community in Frankfort, and an apprentice program. During season 7, technical enhancements such as full soundtracks and elaborate fight scenes were added to performances.

The group continues to grow and in such, develop a strong bond between the Chicago-based theatre artist community and Benzie County. Lakeside Shakespeare Theatre hopes to eventually receive regional recognition as a professional summer theatre and education center.

Love Shakespeare or outdoor theatre in general? Visit Ludington in August and September for the Stratford on the Avenue Theatre Festival!


For more activities & attractions, check out these additional links for Things to Do in Northwest Michigan:

Traverse City Events & Festivals -- Festivals in the Traverse City area celebrate cherries, microbrews, wine, comedy, films and more. There's fun for everyone!
Northwest Michigan Wineries -- Make a day of it and visit many different wineries, in the beauty of Northern Michigan along Lake Michigan.
Visit Northwest Michigan -- There is so much to see and do in the Grand Traverse, Leelanau and Benzie counties areas.
Traverse City beaches -- Pretty parks are scattered throughout the Traverse City region and most parks have picnic tables, grills, and playgrounds.
Visit Grand Traverse County -- The Grand Traverse area encompasses Traverse City, the Leelanau Peninsula, Grand Traverse Bay and the Sleeping Bear Dunes National Lakeshore. Not only will the scenery amaze you, but there is so much to see and do in this area of Northwest Michigan.
Lake Michigan Car Shows -- Car shows are an important part of many community celebrations during the summer.
Visit Leelanau County -- One of the most beautiful sections of the Lake Michigan Circle Tour is found in Leelanau County, which is actually a peninsula northwest of Traverse City.
Visit Benzie County -- Whether you travel up scenic M-22 or US-31, stop into one of the small towns in Benzie County, like Frankfort, Elberta, Benzonia, and Beulah.
Also, check out Things to Do in West Michigan and Things to Do in Northern Michigan for more places to explore.
(style101)